A great facility for the community and visitors 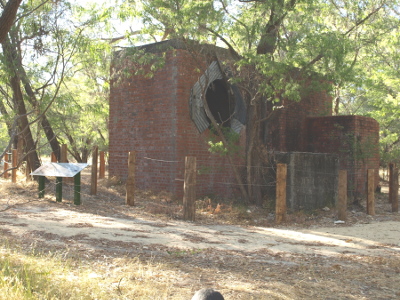 The WA Portland Cement Company operated the Lake Clifton Lime Kiln Works from 1919 to 1923. Sediment from the bed of Lake Clifton – marl – was dredged by electrically operated machinery sitting on pontoons that were tied to wooden stakes in the lake. The scars from the dredging can still be seen in the Lake today.

The marl was pumped through a “Ribbon Pipe” pipeline into vast settling ponds from where all the vegetation had been cleared. The marl then dried and formed “bricks”. Initially these were loaded onto trucks by hand and sent by truck to the WA Portland Cement Company’s works in Burswood where lime was produced from the marl. This was used to make cement. Until this time lime had been imported from the Eastern States and was very expensive. These Works in effect helped start the cement industry in WA.

A tent/shanty town was sited near the works to house the workers. There is no longer any obvious evidence of the Lake Clifton Townsite

In 1921 a railway line was built from Waroona to Lake Clifton and the dried marl was sent to Burswood by rail.

Sometime between 1922 and 1923 a rotary kiln (roaster) was constructed to process the marl on site to save costs.

By now the dredging was digging deeper into the Lake. The lime now produced by the onsite kiln was found to be unsuitable for use in cement and the works closed on September 1923.

The Company dismantled the infrastructure leaving only the brick structure that was used to support the kiln. The railway was taken up in 1924 and transported to Lake Grace for the Lake Grace to Newdegate line. Parts of the railway embankments and culverts can still be seen in the local bush between Old Coast Road and the Forrest Hwy and in parts of the farmland between the Forrest Hwy and Waroona.

The Townsite was abandoned by the Company and the workers and families were left to their own devices. Most made their way back to Waroona by hitching horses to the railway wagons and travelling along the railway line before it was taken up.

In 2002 a concept plan to develop the area into a picnic area and walk track was developed. However funding was not able to be found and the project languished. In 2015 the Lake Clifton-Herron Residents Association (LCHRA) gained a Lotterywest grant to produce a new, updated Concept Plan.

Since then, when funding has been obtained, LCHRA has worked with the Dept. of Biosecurity, Conservation and Attractions (DBCA) to develop the area. Further development will be the installation of a short boardwalk at the end of the current track so that the remains of the Works in the Lake can be viewed. The boardwalk will also provide bird-watching opportunities.

Please watch and enjoy the video and go down to have a look at what has been achieved since 2015.